The two-time defending Champion’s Cup title-holders will raise their championship banner to celebrate the home-opener on Saturday, January 21 at SaskTel Centre in Saskatoon. That game comes after the Rush launch the ’17 regular-season with a two-game road trip as they visit the Georgia Swarm (Jan. 7) and Toronto Rock (Jan. 14).

Saskatchewan will meet the Calgary Roughnecks and Colorado Mammoth four times each – twice at home and twice on the road.

For the first time in team history, the Rush swept the Roughnecks in regular-season action, taking all four games including an overtime victory in Calgary. The Rush then followed their regular-season domination of the Roughnecks by eliminating Calgary in two straight games in the West Division Final.

The Rush went 3-1 regular-season action against the Mammoth in 2016. Saskatchewan earned its very first home-turf win at SaskTel Centre by beating Colorado, and then pulled off the sweep of a home-and-home weekend series to clinch first in the West Division.

The games between the Rush and Mammoth in 2017 will have some additional impact on the heels of Monday’s blockbuster trade between the two teams. Saskatchewan acquired former NLL Rookie of the Year Adam Jones and a second-round draft pick in exchange for forward Zack Greer and a first-round pick.

The Rush will also meet West Division foe Vancouver three times during the regular season including two games at SaskTel Centre. Although the Stealth missed the playoffs, they were the only team that beat the Rush twice last season. But in the Rush’s lone win over Vancouver, they set multiple franchise records including most goals in a game during a 24-16 blowout in B.C.

There will be only game between the Rush and the Buffalo Bandits during the regular season as the two teams that battled for the 2016 Champion’s Cup will clash in Buffalo on Saturday, April 1st. The Rush will play East Division opponents a total of seven times this season – home and away matchups against Toronto and Rochester Knighthawks, as well as a showdown with the New England Black Wolves, who ended the Rush’s six-game winning streak last season, on Saturday, April 15th.

Saskatchewan’s schedule has only two doubleheader weekends. They will host Calgary on Friday, March 25 and then head to Colorado to play the Mammoth the following night. The Rush will wrap up the regular-season Friday, April 28 in Colorado and Saturday, April 29 in Calgary. 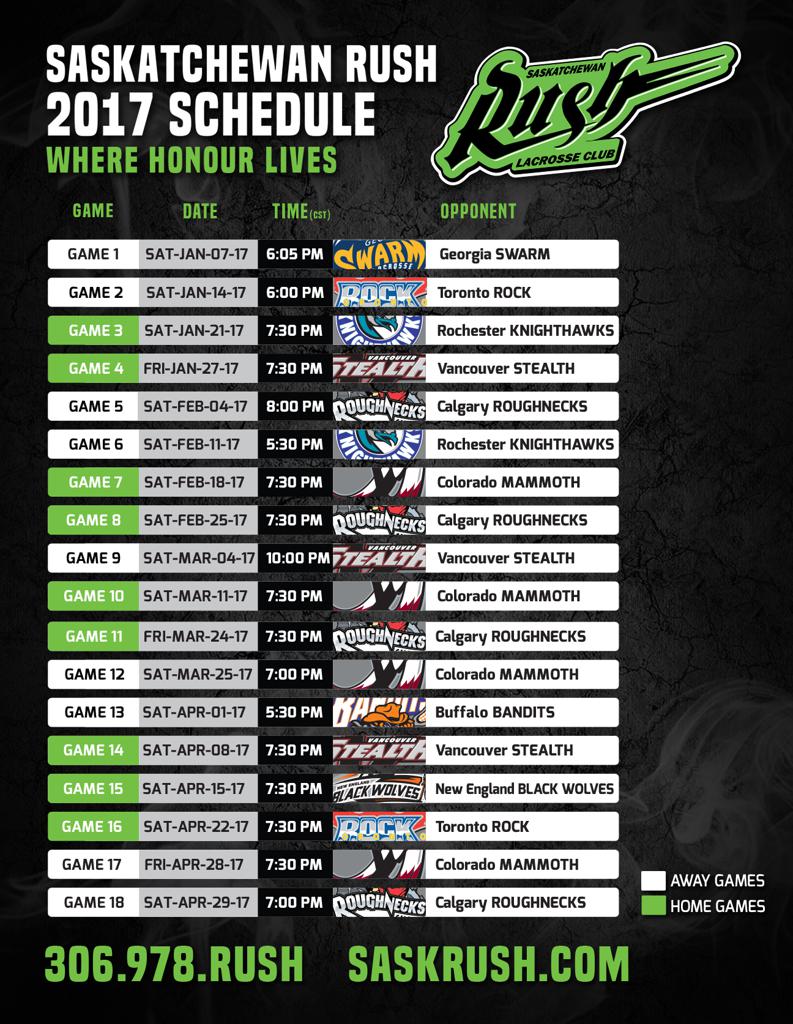